Part of the Tales of Nebezem Series. Kongregate. There are 4 endings and different tasks depending on the path you choose. In this path, Marcus decides to join Praxipolis’ army to fight against the lizardmen.

Alacres
Leave the clan through the west and go to Praxipolis, which is to the southeast in the world map.

Praxipolis
1. Enter the barracks (the only building). Talk to General Brutus who’s diagonal to an open book on the table.

★ Path Choice ★
Do you want to get recruited into the army in exchange for a cure for the Alacer chief?
Yes, I accept. (✓)
No, I decline.

2. Brutus tasks you to steal fire orbs from Pyromilites and Veraces. If you talk to him again, he tells you that the orbs will probably be in the two clans’ Towers of Magi.
3. Leave for Oasis Vitae, which is to the west in the world map.

Note: If you go to Alacres and talk to Tiberius who’s in front of a house, he advises you to find disguises in Pyromilites’ Laundry Room and to ask the girls in Veraces’ Brothel for help.

Oasis Vitae
1. Talk to the gnome to the north of the pots
✯ Plürd (Gnome): Arrange the 12 pots of flowers such that flowers of the same colour touch each other. At the end of the test, all pots must be on the grass.
2. Arrange the flowers as shown in the image below. Put the last pot at the empty space next to Marcus. 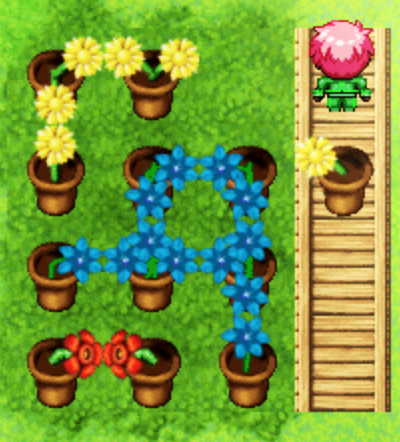 3. Talk to Plürd when you’re done (+Getaway powder).
4. Leave the oasis and go to Veraces.

Veraces
1. Go east to the Warriors’ Area. Go east until you’re at the well surrounded by palm trees, then go south and enter the Brothel.
2. Talk to Phoebe, the blonde towards the north.
✯ Phoebe (Harlot): An exotic piece of jewellery for Verax clothing.
3. Go to Alacres.

Praxipolis
1. Enter the barracks and talk to the Windel with a ponytail.
✯ Gudrún Frigadottir (Windel): Another necklace for her blue necklace
2. Talk to her again to trade the necklaces (+Blue Necklace).
3. Return to Veraces.

Veraces
1. Go to the Brothel and give Phoebe the necklace (+Verax clothes).
2. Leave the Brothel and go to the adjacent Tower of Magi and enter it. If you talk to Basilius, the magus, he says that he keeps the Fire Orb in a chest on the second floor and that it’s locked.
3. Go up the spiral stairs. The plaque at the top right corner says “The chest code is the amount of these objects”. The code is 3 digits. If you go around the 3 maps of Veraces counting, there’s 6 flowers, 3 cacti and 9 signs. Enter 6-3-9 into the chest (+Fire Orb 1/2)
4. Use Getaway to create a portal. Step into it. Go to Pyromilites.

Pyromilites
1. Go all the way east to the Women’s Area.
2. Go to the laundry room where the blonde woman is at. Push the bottom crate to the right and the upper crate to the left such that the crates and shelves help form a continuous shadow across the room. 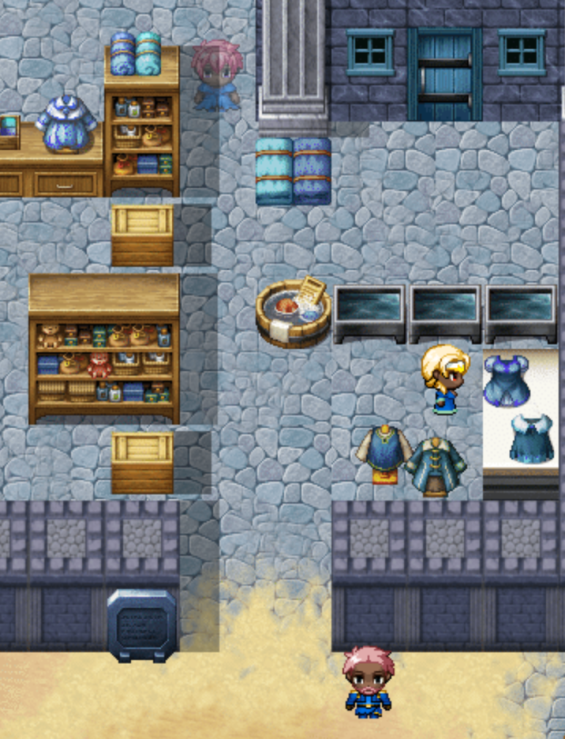 3. Go to the top left corner and get the blue clothing (+Pyromiles clothes).
4. Go to the topmost tile of the shadowed area, and press ‘H’ or click the icon on the bottom right to hide in the shadow. Stay in the shadow and walk south until you leave the laundry room. Leave the Women’s Area.
5. Go to the Tower of Magi, the first building after you return to the main Pyromilites area. Talk to the man in blue.
✯ Lucius (Grand Magus): Bring him food.
6. Return to the Women’s Area and enter the kitchen. Talk to Dulcia, the cook (+Meal).
7. Return to the Tower of Magi and give Lucius his meal.
8. Open the chest at the top part of the room as Lucius eats (+Fire Orb 2/2).
9. Go to Praxipolis.

Praxipolis
Enter the barracks and talk to General Brutus.

Ending #4 – Greater Glory
Marcus gained many skills as a Praxipolitan soldier and lived a meaningful life fighting off the lizardmen hordes. Whenever he returned home from the battlefrield, Valentina greeted him with a joyful “Oh!”.

Chief Alacer was cured, and although the Alacres remained a separate clan, their population grew and they started training more men and sending them to Praxipolis as reinforcements for the fight against lizardmen.

Having lost their Fire orbs, the Verax and Pyromiles clans were weakened. As they began focusing their war efforts solely on each other, they continued getting weaker. The whole region became more stable as a result.

This site uses Akismet to reduce spam. Learn how your comment data is processed.

Consider donating or whitelisting moshimushi on your AdBlock if you appreciate the guides and walkthroughs on this site. Donations help keep the site running. Thank you!

-------
If you see moshimushi's guides on other sites, they've been stolen.
Follow moshimushi on WordPress.com