My translation of the official Japanese page here and some supplemented fun facts.

暁 哲     (Akatsuki Tetsu)
The protagonist of this story.
Took office at the 12-storey prison for the sake of Nagi, who’s part of the Saeki family that took him in.
Has a strong sense of justice.
However, he begins to hold doubts about imperialism and the 12-storey prison’s system as he carries out his duties.

冴木 凪     (Saeki Nagi)
The protagonist’s close friend. His appearance gives a cool impression but he’s hot-blooded on the inside.
His older brother, Naoya, had taken care of him in place of his parents who were too busy with work to come home. As such, he’s very close with Naoya and chased after him to take office at the 12-storey prison.

冴木 直也     (Saeki Naoya)
The protagonist’s senior-partner.
Nagi’s older brother and the oldest son of the Saeki family that took in the protagonist who didn’t have any relatives.
Has a very kind and gentle personality but possesses firm principles.

不破 充     (Fuwa Mitsuru)
Naoya’s close friend and Nagi’s senior-partner.
Due to his easygoing and wisecrack personality, one is unable to discern his true thoughts.
Doesn’t idolise imperialism that much.

鬼堂 大和     (Kidou Yamato)
Same batch as the protagonist Tetsu and Nagi.
Rural descendant of a samurai, his family was originally a warrior family but later found success by producing cotton and silk in the Tōhoku region.
Doesn’t get along well with Tetsu and Nagi. 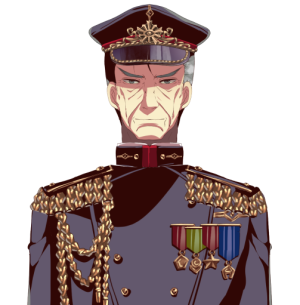 金剛 厳     (Kongou Gen)
Chief Director of the 12-storey prison and a top brass of the Metropolitan Police Department.
His grandeur・mien・intimidation are amazing.

nakimushi’s supplement: fun facts (may contain traces of spoilers)
– ‘Partner’ was actually translated from ‘buddy’ (バディ, badi).
– Even Yamato’s name feels staunch! 大和 (Yamato) is another way to refer to Japan.
– The 草 (kusa) character in Kusama Saizo’s name can mean grass or herb, much related to his role in the story.
– The 厳 (gen) character in Kongou Gen’s name can mean strictness or rigidness.
– 凪 (nagi) can mean calm even though he’s pretty rash at times.
– If you’ve gotten Kyouji’s gallery card, you’ll see that Kyouji’s birthday is on September 1st. The irony ><

4 thoughts on “[The Prison Boys] Characters”

This site uses Akismet to reduce spam. Learn how your comment data is processed.

Consider donating or whitelisting moshimushi on your AdBlock. Donations help keep the site running. Thank you!

-------
If you see moshimushi's guides on other sites, they have been stolen.
Follow moshimushi on WordPress.com